After seeing a Kakao Talk conversation between BoA and Super Junior‘s Leeteuk, netizens were quick to point out the awkward conversation.

In support of her comeback, the Super Junior member sent BoA messages of encouragement through the popular messaging system, and a screenshot of the conversation was eventually uploaded online by Leeteuk himself.

Despite being from the same company SM Entertainment, netizens pointed out that the two singers did not appear close in their conversation, and that BoA appeared to be annoyed at Leeteuk’s messages. The short excerpt of the conversation starts off with Leeteuk talking about BoA’s latest music video.

Leeteuk: Totally cute~
But I wish we saw more of BoA-nim’s pretty face
I could only see it through the mirror’s reflection~

BoA: ㅋㅋ I just had fun filming it

Leeteuk: I can’t get enough~ (misspelled)
My heart fluttered while watching

Although the conversation excerpt was quite short, netizens have already picked out the singers’ word choices, concluding that the two are in fact not very close at all. Netizens took it to Newsen to explain their reasoning. 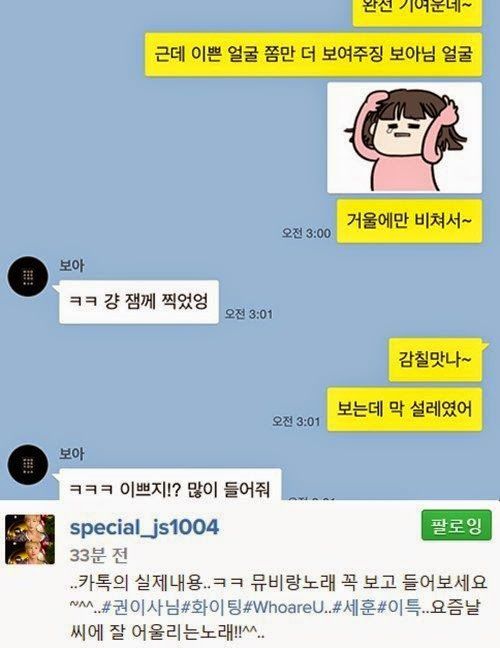 6. [+68, -4] Don’t women not like it when guys who aren’t their boyfriends talk to them like this? ㅋㅋㅋ Just reading it turns me off